i-FACTOR Peptide Enhanced Bone Graft is based upon the biological activity of a 15 amino-acid peptide found in type I collagen. This protein segment (P-15) is responsible for the attachment and proliferation of osteogenic cells. These cells bind to the synthetic P-15 found in i-FACTOR the same way they would bind to human Type I collagen (figure 1). 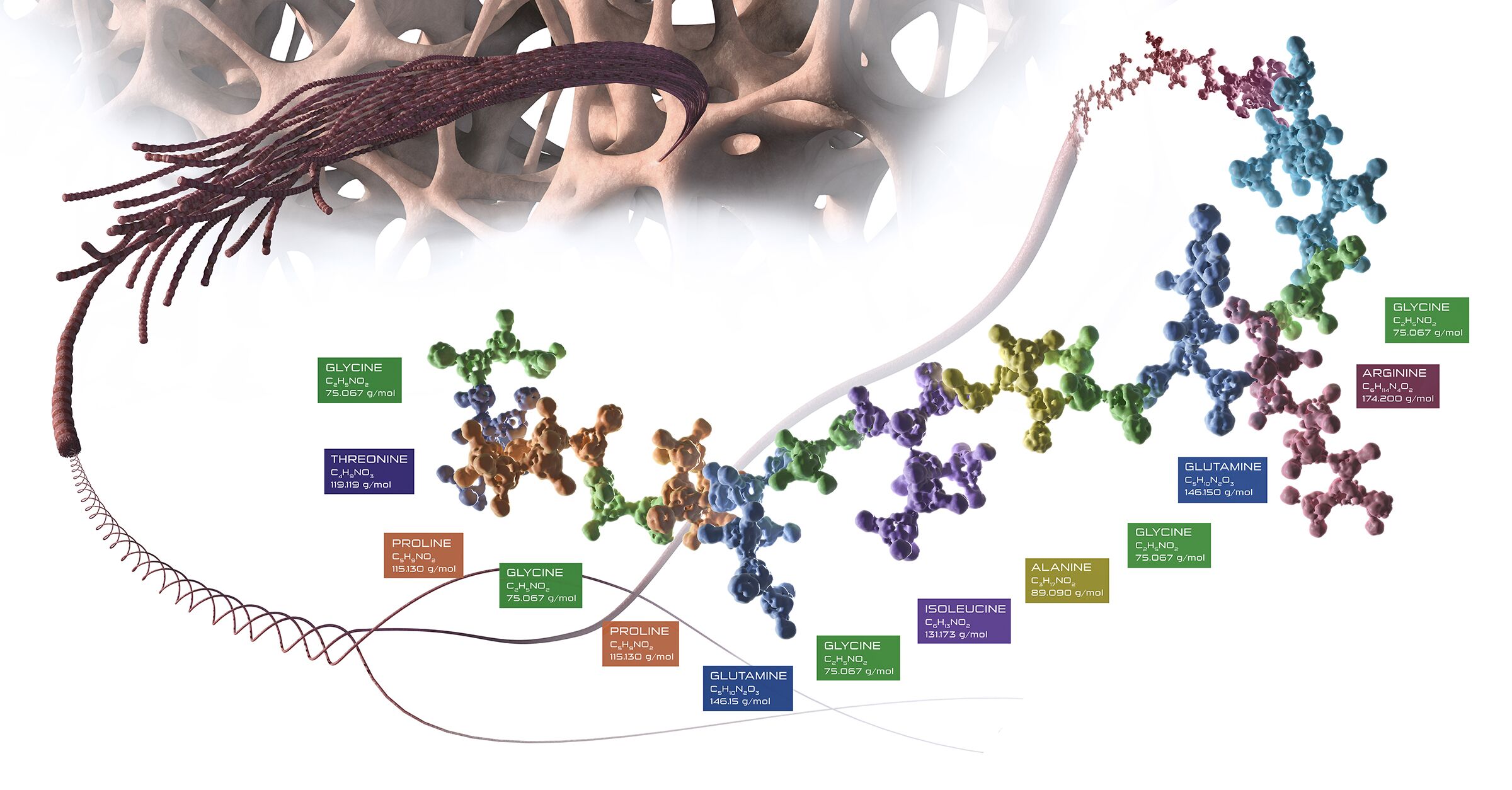 Figure 1. Schematic illustrating the organic phase of bone, comprised of rope-like collagen macromolecules, their component triple helices, and P-15, a 15 amino acid peptide present within single chains of the triple helices. Type I collagen molecules comprise a triple helix formed from two α(I) and one α2(I) chains. The P-15 sequence (residues 769-783) comprises about one per cent of the length of the collagen molecule.

i-FACTOR Bone Graft increases the opportunity for cell binding in the fusion site by making an abundance of the P-15 peptide available to osteogenic cells. The ability of P-15 to enhance cell binding, increases the number of viable cells at the healing site and speeds the process of new bone formation, and closely resembles the natural process of bone regeneration. (figure 1)
The P-15 peptide in i-FACTOR is immobilized on an anorganic bone mineral (ABM) surface and enhances cell adhesion and migration, and induces osteoblast cell proliferation and differentiation. P-15 also improves cell viability and the receptor-mediated anchorage of osteoblasts by P-15 initiates a number of signal transduction pathways that lead to the synthesis of growth factors, cytokines, and bone morphogenetic proteins.  The release of growth factors further accelerates the bone regeneration process by promoting the migration, proliferation, and differentiation of mesenchymal stem cells and other bone progenitor cells from surrounding tissue. 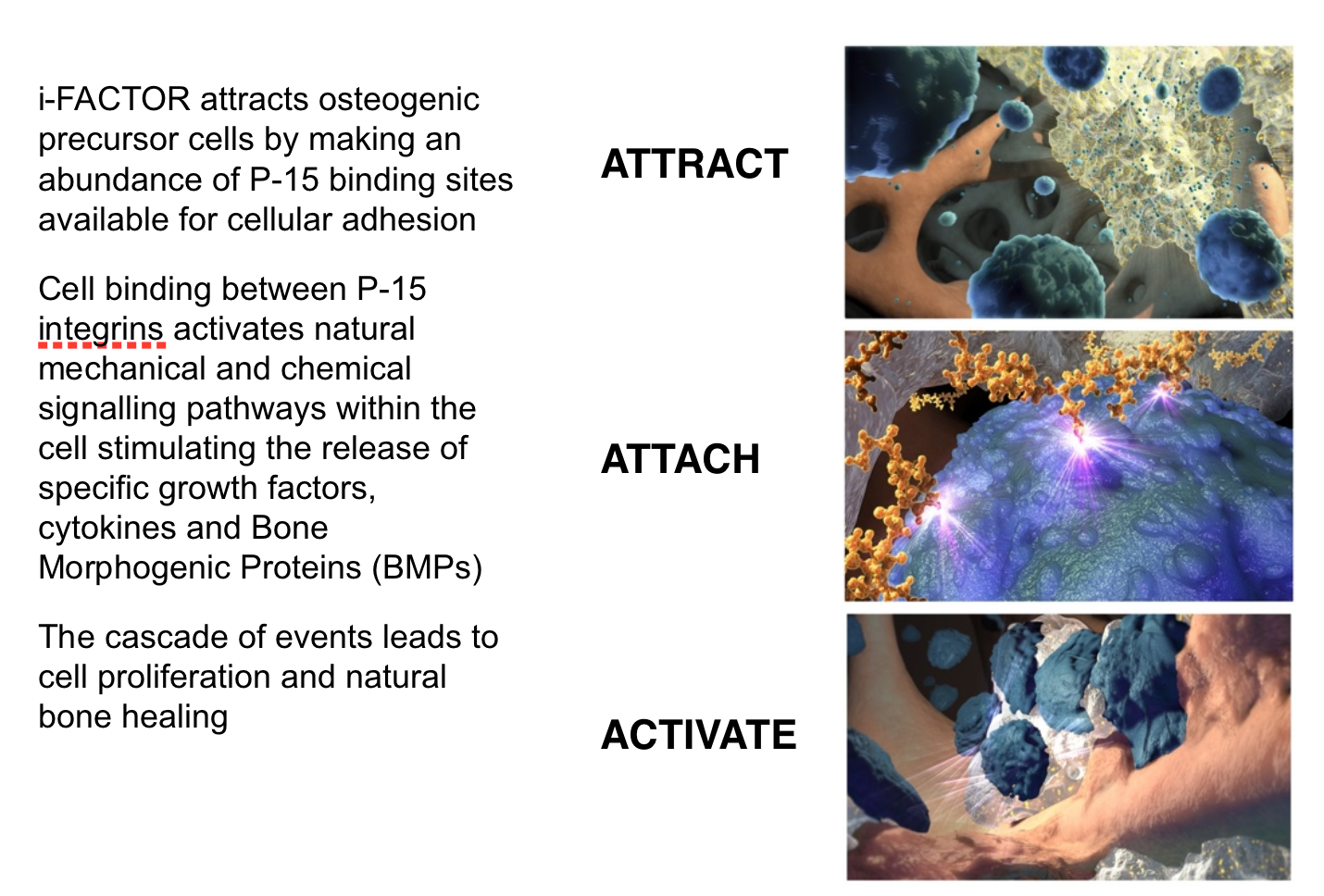 Figure 2. i-FACTOR’s mechanism of action is surface bound. Cells have a natural high affinity for P-15 which increases the number of viable cells at the healing site.

P-15 promotes cell attachment. For many cell types, attachment to various pro-adhesive substrata typically occurs within minutes to several hours following their addition to a substratum e.g., [1-3].   Within minutes of adding cells to P-15-coated substrata, those cells had attached in greater numbers [4-10], were more resistant to being rinsed away and exhibited increased viability [7,11] and a lower level of apoptosis [11] compared to cells that had been added to control substrata. Therefore, it was concluded that P-15-coated surfaces promote cell attachment. Cell attachment is the earliest phase of cell adhesion and can be mediated by physical forces like charge-charge, Van der Waals bonding or hydrophobic interactions between cell surfaces and the substratum [12-14]. However, attachment as well as stable adhesion can also be mediated by specific, high affinity receptor-ligand interactions, e.g., between cell surface receptors like integrins and their ECM binding partner(s) on the substratum [15-16]. These findings are highly relevant to the enhanced regenerative activities of P-15-coated implants. The first stage of the remodelling and repair of connective tissues involves cell infiltration and attachment. Moreover, the number of viable osteoprogenitor cells present correlates with the speed and quality of remodelling and regeneration [17]. Thus, skeletal stem cells recruited locally at the bone fracture site promote healing and their ablation disrupts bone regeneration and remodelling [18].

P-15 promotes cell adhesion and spreading. For many cell types, cell-substratum adhesion typically occurs over as little as an hour to many hours [1-3]. After cells attach to a suitable substratum, cell movement, cytoskeletal dynamics and cell process extension occurs whereby cells begin to form stable sites of cell-substratum adhesion [19]. Thus, cells use cytoskeletal dynamics to spread out over a substratum and extend lamellipodia, or flattened extensions which help them move over or adhere to the surface, and numerous filopodia which are long, slender pseudopodia that may help establish multiple points of cell-substratum adhesion [19]. Studies demonstrated that on P-15-coated substrata, increased cell spreading and lamellipodia and filopodia formation was observed by 30 min and remained obvious even days later in comparison with those cells cultured on control substrata [6, 9,20]. Stable sites of cell-substratum adhesion may then transition to become focal adhesions which are platforms for cell activation and signaling [21-22]From three hours through four days after the onset of cell attachment to P-15-coated substrata, those cells were more viable and showed less apoptosis (programmed cell death), compared with cells on control substrata. Cell survival and growth is “anchorage-dependent”, meaning that cells must firmly adhere and spread onto a substratum to enable their survival and growth [23-24]. The superior cell attachment properties of the P-15-coated substrata afforded a survival advantage to cells, and that conversely, control substrata were inadequate to support robust cell attachment and anchorage-dependent survival.

P-15 promotes cell activation and signaling. From six hours through five days after the onset of cell attachment to P-15-coated substrata, distinct evidence of focal adhesion formation and cell activation were detected [9,20]. In comparison the cells on control substrata contained few focal adhesions and little evidence of activation. These observations were made in two different experimental systems. In the first, pre-osteocytes (MLO-A5) or mesenchymal cells (CH3T101/2) were added to P-15-linked titanium surfaces and fed culture medium formulated to promote osteogenesis. After cell adhesion occurred, numerous focal adhesions rich in phosphorylated focal adhesion kinase (pFAK) and α2 integrin immunostaining were observed [9]. In the second, mesenchymal cells (CH3T101/2) were plated on P-15 absorbed to tissue culture plastic and fed with chondrogenesis-promoting media. After cells had adhered, numerous focal adhesions rich in pFAK and α5Β1 integrins were seen [20]. Focal adhesions which co-localize with intense pFAK and integrin staining are a hallmark of integrin-mediated cellular signaling and activation orchestrated via pFAK and downstream signaling pathways [6-7]. Notably, in the two experimental systems, P-15-substrata promoted cell adhesion and survival but resulted in different pathways of integrin signaling, and ultimately promoted cell differentiation.